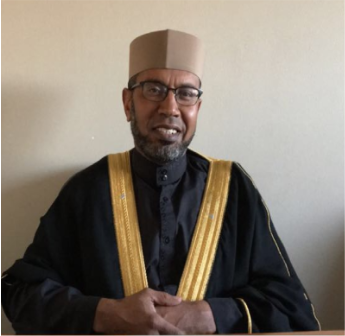 Dr. Mahmoud Hassan E. Hassanein
imam@theiclr.org
Dr. Mahmoud Al-Denawy is originally from Egypt and was born in Luxor(upper Egypt) in 1970. He grew up there and memorized the Holy Qur’an when he was ten years old. He joined Al-Azhar Institute(the well reowned world Islamic institute) when he was eleven. When he was 18, he started preaching in different mosques and upon completing high school in 1988, he moved to Cairo to study different Islamic subjects in English at the Faculty of languages and translation, Al-Azhar University. In 1992 and after graduation Dr. Mahmoud A-Denawy continued his work as a preacher in different mosques in Egypt. In 1995, he was appointed as a lecture assistant of Islamic studies in English. In 2000, he moved to UK to join Durham University as fulfillment of his PhD. While staying in UK, he spared no effort to build bridges with other faiths. As part of his study was about the Muslim/non-Muslim relations, he had frequent meetings and saminars with other faith leaders there. Furthermore,he delivered more than 100 Friday sermons in English. He was awardwd his PhD in February 2006.

After getting his PhD, he returned home to Egypt. Dr. Mahmoud went on to voluntarily work for many years in different mosques in Cairo. He was a frequent guest on many English speaking TV channels in Egypt in addition to presenting his own programs on different Islamic themes. Being a translator and simultaneous interpreter, Dr. Mahmoud translated more than 15 books from Arabic into English and vice-versa. He also interpreted a lot of international events and conferences. In June 2015, Dr. Mahmoud moved to US to work as the Imam of the Islamic Centre of Litter Rock, Arkansas. He worked hard doing various da’wa activities and lectured in different churches and other places of worship. In addition he did the same with different schools, colleges, and universities. He also talked to some TV, newspapers and radio stations as a representative of the Islamic Centre of Little Rock and participated in a lot of reaching out activities and community services. Dr. Mahmoud is marry and is blessed with four children, two boys and two girls.